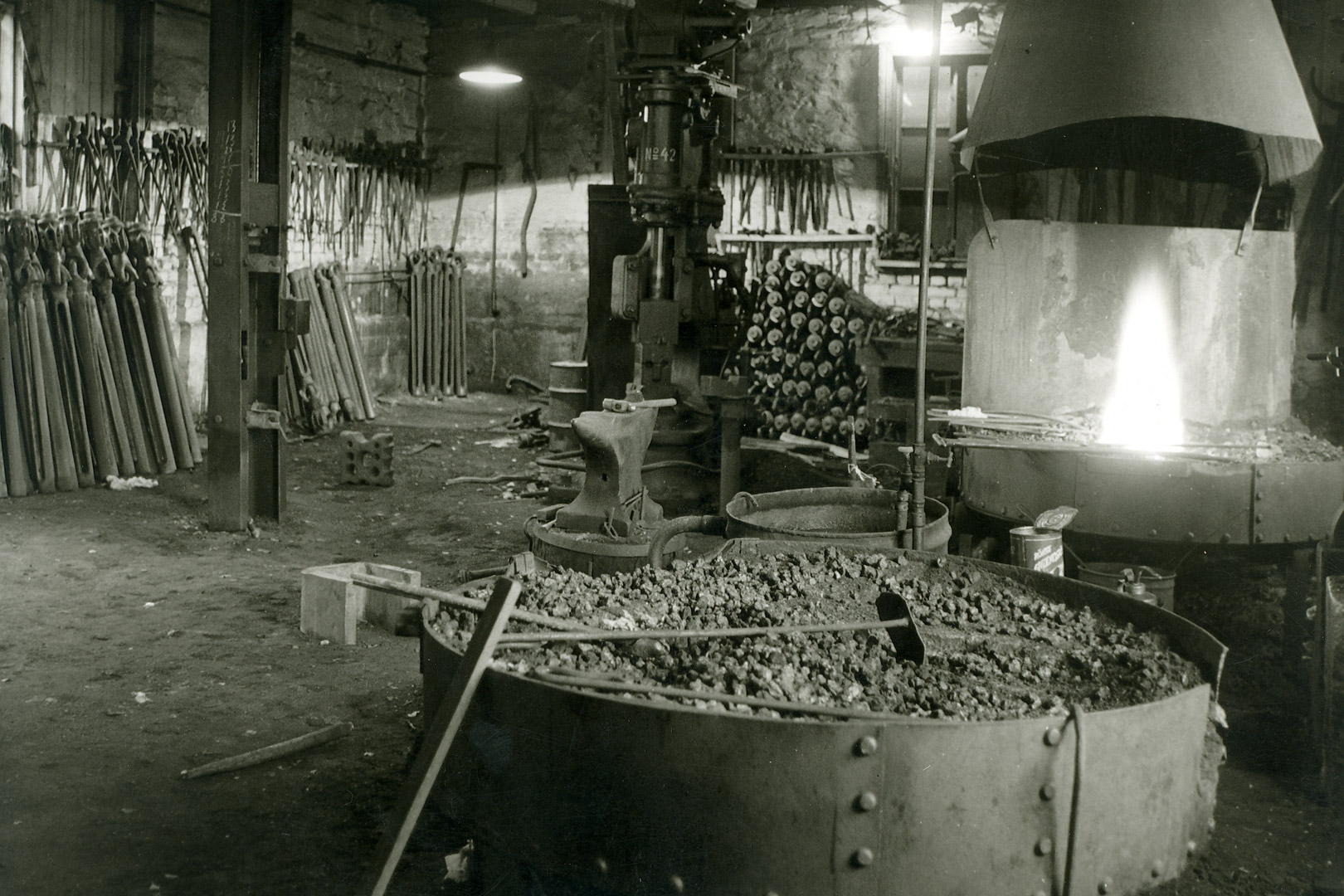 His father is known to be one of the best ship smiths in Norway and his workshop in Arendal has a good reputation. Several of Carl Henrik’s brothers have already started their own businesses at home. Young Carl Henrik leaves for Tønsberg and starts working for Hans Walløe at Teien. Hans Walløe is the most important ship-owner in the area. Several ships have been built in his yard in the previous decade. But there are many more to come, and this will keep Carl Henrik very busy.

The story of H. Henriksen Mek. Verksted dates back to 1834. In this year, a young blacksmith and his newly wedded wife moved to Tønsberg. Carl Henrik Henrichsen has decided to start a career in what has become the country’s largest shipping town.

Some years later a new shipyard is established at Vallø, not far from Teien, and so the family decides to move. A new workshop is built at Råel in Slagen and Carl Henrik’s business is thriving. Some years later his son, Henrik, starts working together with his father. However, father and son do not get on very well, and young Henrik starts his own business nearby. He is very popular and attracts a lot of customers. His father, on the other hand, decides to move away from the area. 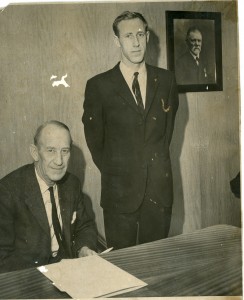 In 1870, the industrious Henriksen gets into contact with Svend Foyn. The former skipper has earned a lot of money catching seals in the North Sea.

He has now built the world’s first steam ship in the hope that he will be able to catch the impossible Finn whales which swim fast and sink when they die. This proves to be an almost impossible mission, as it is very difficult to kill these beasts. Foyn contacts several blacksmiths in the area, but still has no luck. However, Henriksen proves to be the right man. After two years of intense work they are able to cut the Gordian knot. Now it’s finally possible to hunt down the world’s largest animal in a modern way. All the experiments have cost Foyn more than 4 million NOK. However, he is granted a ten-year monopoly to catch big whales off the northern coast of Norway.

In the meantime, Henriksen experiences a tragic fire. His workshop is turned to ashes, and the family decides to move to Tønsberg. Industrialization is already occurring in Norway and a lot of new businesses have already become established in the town. The blacksmith sees great possibilities in the new whaling industry. His many inventions and improvements soon mean that his services are in great demand.

At the end of the 19th century Foyn’s monopoly is cancelled, and whale hunting off the coast of Finnmark accelerates. In 1900, more than 40 whaling stations are operating in the northern part of Norway! Henriksen has by then received several awards for his great products. Everybody knows the workshop which the next generation has now taken over.

In 1904 politicians put an end to the profitable Norwegian whaling industry. The large whales are protected. The fishermen got what they wanted.

Several years earlier, people from around Tønsberg had found highly profitable whaling areas – on the other side of the globe. There is room for great expansion in the years to come. The new boss of the workshop, Karl Ludvig Henriksen, now delivers complete whaling shore stations. And it is not long before H. Henriksens can boast that their products are in use all over the world! While many of the most important shore stations are built up by Henrik, the youngest brother, Harald, specialises in building whale catchers at the local shipyard, Kaldnes.

Karl Ludvig and his brothers constitute a mighty alliance in the modern whaling industry.

At the end of the 19th century Foyn’s monopoly is cancelled, and whale hunting off the coast of Finnmark accelerates. In 1900, more than 40 whaling stations are operating in the northern part of Norway! Henriksen has by then received several awards for his great products. Everybody knows the workshop which the next generation has now taken over.

In 1904 politicians put an end to the profitable Norwegian whaling industry. The large whales are protected. The fishermen got what they wanted.

In the 1930s, the third generation joined the business. By then, over-production of whaling oil was a huge problem. In addition to this, a strong competitor had appeared in the nearby town of Sandefjord. When Haralds’ son, Finn Henriksen, took over in 1935 there had also been a number of internal reductions. He tried to be inventive, but the board did not listen to him. Thanks to his brother, Harald, who became a gunner in 1938, he managed to improve both the harpoons and the exploding head. But Finn was always looking for additional products.

When Rolf Huseklepp started as a technical leader, measures were taken to find a better way of killing the whale. Together, they constructed several new machines. The fifties was a good period for the business.

In 1956, the fourth generation came on the scene for the first time. This was near the end of the great whaling period, which had lasted about 100 years. A new product had entered the arena, conveyor systems for sand and gravel. This was going to be the foundation in a new period for this profiled workshop. More space was badly needed. The whole block was sold, making space for a shopping centre, and in 1967 new and modern facilities were built just outside the town. The readjustment continued and soon Finn’s son, Henrik, took over. By this time he had become an engineer and had acquired a lot of experience in Sweden.

Thanks to young Henrik’s inventiveness and construction qualities the seventies was a busy decade. A lot of special products were manufactured. Pressure testers for GRP pipes and ship cranes were the main products, as well as deliveries for the Norwegian whalers and other maritime customers. In 1978 the popular ‘Henriksen Hook” was invented.

In the eighties, the company was engaged in finding a new method for killing whales off the Norwegian coast. In co-operation with Raufoss and veterinarian Egil O. Øen, a new grenade was developed. This was based on Penetritt, an explosive that is 25-30 times stronger than black powder. Because of this, Mr. Øen and Mr. Henriksen were requested by the American authorities to develop a new exploding dart for the Eskimos in Alaska, hunting for Bow-head Whale. This new penetritt-dart is now used by the Alaskan Eskimo Whaling Captains, and they are very happy with it. Even today, approximately 120 of them are delivered every year.

The company was involved in a large job at Aker Brygge in Oslo and this caused a difficult financial situation for the old family business and they lost a lot of money. 1989 became a critical year, and for the first time the company’s finances were in bad shape. But things improved and engineer Per Johnny Mathiassen came back as a manager.

Since 1990 the business in Tønsberg has established a healthy turnover. Henrik’s strategy, avoiding mass-production in favour of established customers, has proved to be successful. It has always been important to make improvements and develop new products. The production of custom-made MOB-boats, which started in 1986, has shown the unique qualifications within the firm. 158 boats have been delivered in the last 20 years. In 2001 a member of the fifth generation got his first pay cheque. The board agreed that the time had come for him to take over. And Henrich N. Henriksen said YES.

In 2006, H. Henriksen Mek. Verksted A/S delivers specialised products to customers all over the world. Most of them are developed in co-operation, based on the company’s vast knowledge, to meet their customer’s needs. Henriksen junior has played an important part in transforming the company into a modern high-tech developing and production facility.

Today the most important customer and reference is the British Navy. Their use of the “Henriksen Hook” has led to major safety improvements. In September 2006, the company received a prestigious design award for the hooks developed for the “Type 45 naval vessels”.

The family company is now running at full power with a large order reserve and a healthy turnover. 45 employees are, together with their customers, creating a promising future. All made possible thanks to the stubborn blacksmith who started his own company on 14th October 1856.